Plants narrate. They tell us stories about ourselves. They create our fiction and illustrate our imagination. They tell stories in words we inflicted on them, but which we forgot how to read. In the 1868 November issue of Science Gossip (a monthly British popular-science magazine), an unknown author (signed H. C. Richter) wrote an article entitled “Vulgar names” in which he states that vulgar names of plants present ‘a complete language of meaningless nonsense, almost impossible to retain and certainly worse than useless when remembered – a vast vocabulary of names, many of which signify that which is false, and most of which mean nothing at all’. 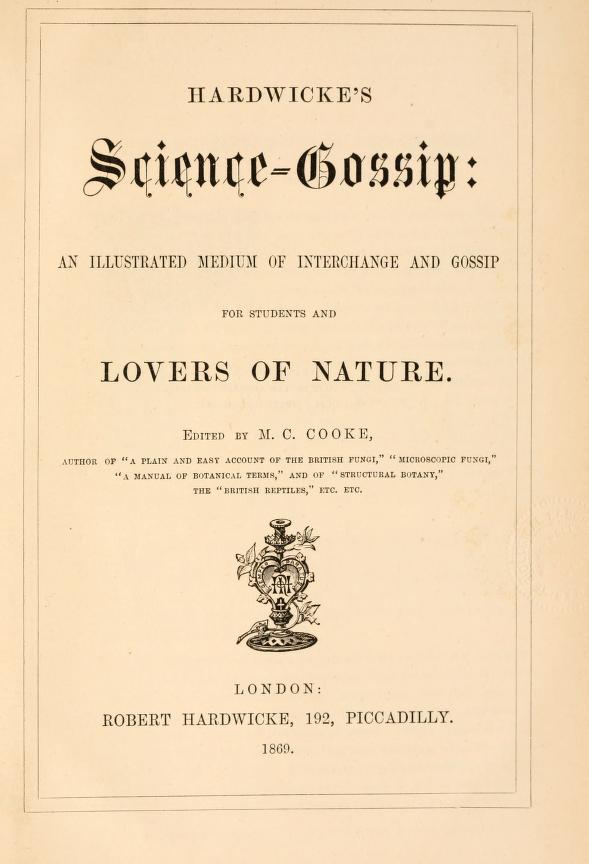 I find vernacular plant names fascinating. They present our languages at their richest, most vibrating and imaginative. Common names of plants need not be formed according to any rule and can change as language, or the user of language, dictates. There is no convention governing the way common names can be written or applied. In fact, in their truest form, common names arise from common use by people in contact with the plants – most often by people who are not aware of the scientific naming of plants. These true ‘common names’ are therefore in a range of different languages, different scripts and not codified in any way. The same species of plant can have very different names in different places, and could have different names in the same place according to different groups of people. Sometimes names used by some people are adopted by others, sometimes the pronunciation gets corrupted in the process and the meaning of the words shifts. This makes the language of plants’ common names the freest language there is. The whole story of vernacular nomenclature is about misspelling, misunderstanding, mistranslating, construing, confounding, confabulating, transforming, transmuting, transposing, twisting, twiddling and turning. The language we use for plants pushes language to its limit, to its outside, to its silence. It seems to have a “foreign language within”, because it is in a constant process of overcoming itself, becoming-other or becoming-foreign to itself, perhaps becoming its own future and its own past.

The subtropical climate of New Orleans fosters an unending cycle of massive vegetation, dwarfing man and architecture by the vigour of its growth. Vegetal life thrives there without intention, builds without planning, takes over, adapts and feeds on fields, swamps, houses, roads and paths. The stupendous flora both colonizes and is colonized, controls and is controlled. Surrounding landscape can be seen as a microcosm of the global environment, manifesting both the challenges and possibilities inherent in the ways humans interact with urban and natural ecosystems. My interest in plants was fuelled by the saturated green environment of New Orleans region and is motivated till today by my curiosity to explore new disciplines along with the plasticity of language. During my 4 weeks residency Deltaworkers provided me access to information about plants and local vegetation. One of the most enticing places I visited with them was A Studio in the Woods, a nonprofit artist retreat and learning center near New Orleans, formed with the mission to protect and preserve the Mississippi River bottomland hardwood forest and to provide a tranquil haven where artists can reconnect with universal creative energy and work in the middle of woods. I hope to get back there for a stay and to observe and collect plants. I’m dreaming of compiling poetry-herbariums from different locations. The Louisiana one would start like this: “Devil and angel stick tight. Pricking monsters bind black nightshade with morning glory and purple daydream with ruby moon.” And would end like this: “Drunk Indian shot farmer’s friend. White sage’s long beard bristle with wind.” 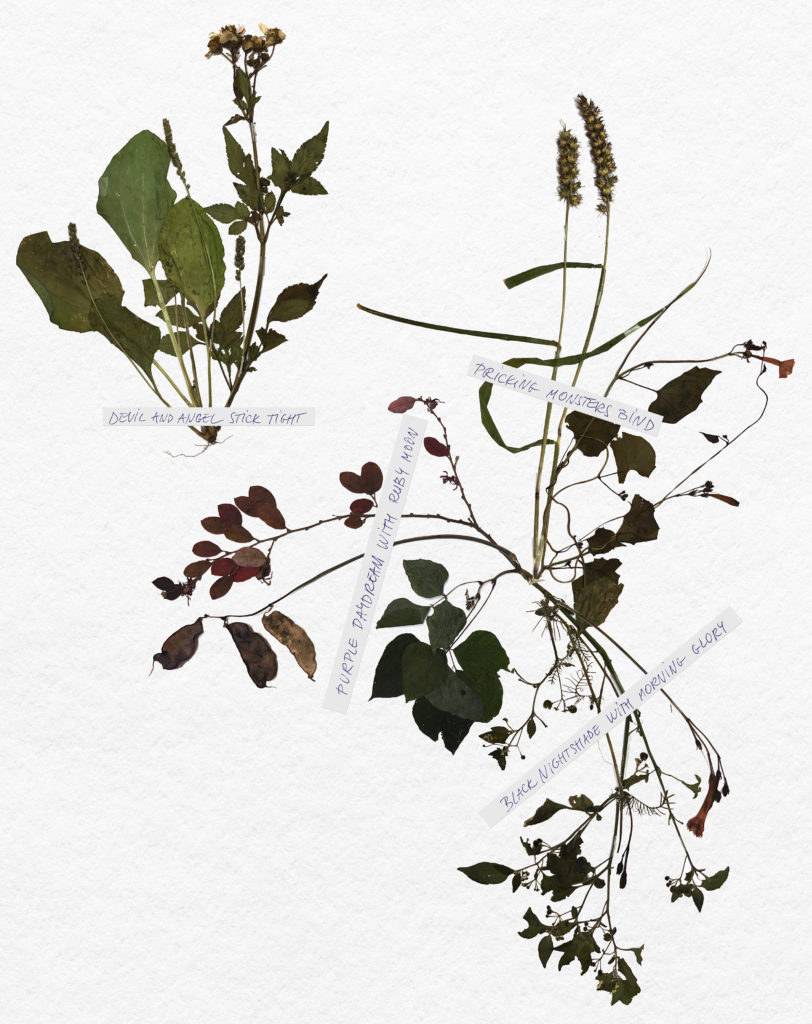 I am interested in the subject of plant life, and, by extension, in the relationship humans have with plants as reflected in language. The general classification of plants as dangerous or useful, invasive or native, forming a “green Hell” or, instead, mirroring the “earthly Paradise” testifies to the political nature of our engagement with flora. Humans have forged strategic alliances with plants which are echoed in their naming, reflected by the words associated with them and by the expressive linguistic combinations used to identify various types of plants.

Yet, what botanical nomenclature tells us is that we look at plants with a certain human bias. We anthropomorphize them. We give them attribution of human traits, emotions, and intentions. Plant names illustrate human characteristics or associations connected to human assumptions. The associative element in vernacular plant naming drew upon comparisons with parts of the human body and with bodily functions, upon their uses, taste, behaviour, effects on us, etc. Fanciful ideas of a plant’s association with animals, ailments and festivities, and observations of plant structures, perfumes, colours, habitats and seasonality have all contributed to their naming. However, all common names mostly refer to plant’s character in relation to humans, rather than to anything about the plant itself. The names we gave plants (mostly stuttering cultural meanings, patriarchal interpretations and assumptions in relation to our senses) are fascinating because of the malleability of our languages, but also because they are discerning facets of how narrowly we understand and communicate nature and reality.

It is captivating to look at plants as texts. All of a sudden vegetation becomes a big dispersed chronicle containing information and an affective assemblage, a biosocial becoming, a biophysical landscape with which human actors are entangled. New Orleans was the perfect place to start to built a “plant thesaurus”, a bank of phrases, expressions and words of many variations with information about the corresponding plants.

Now back in Europe, I still collect vernacular plant names and I am trying to link them within a narrative. I also try to “read” them as they grow. Reading any green spot through vernacular terminology politicises and romanticises nature more than one would expect and we, humans, are always present in the story. When decoded into words, vegetation becomes a mirror, refracting our mental projections on the natural world. The words we use for it seems to unify the world of botany with the world of human nature, culture and language by creating a “strange inversion of reasoning”. 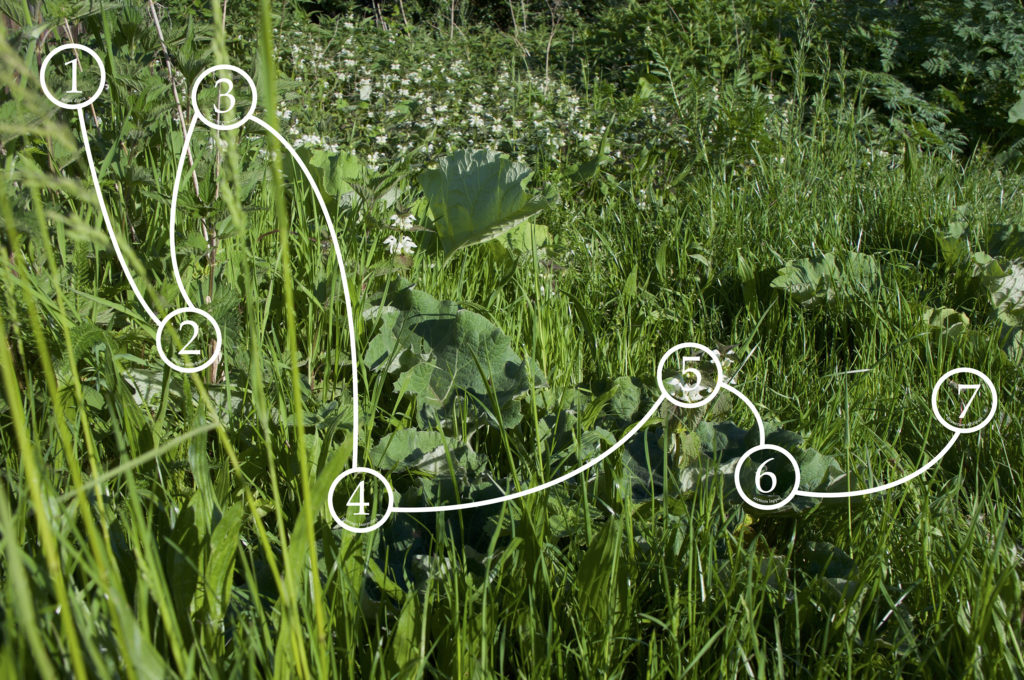 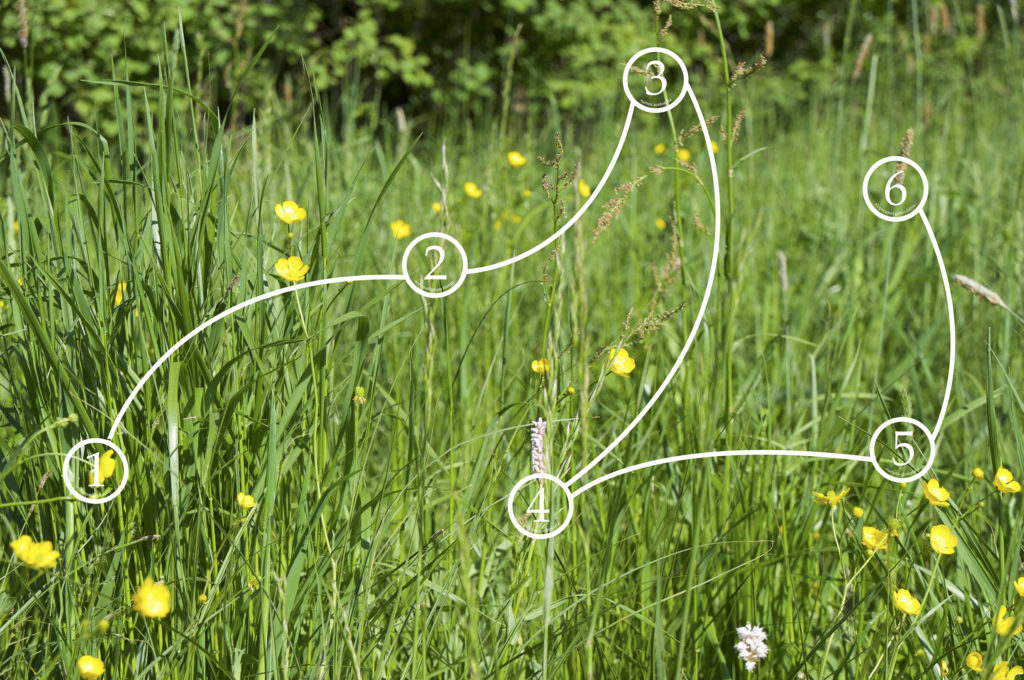 I try to unscramble (more or less) coherent “materialized texts” the syntax of which, in turn, is finding expression in the random growing of wild plants or in herbaria arrangements. Taking the plants’ highly allusive common names as a point of departure, I’m trying to unfold a (visual) anthology of stories, using the (names of) plants as “organs” of language. I like how filtering the human language through plants and the appearances they have generates some sort of weird poetry, both visual and linguistic; it is a language we can also see, rather than only a language as phonemes; plants can be visible logos, connecting words to the essence of being.

I am often seduced to think there’s an etymological connection between the words “plant” and “planet”. There is none, but the connection between the two is much deeper than a linguistic one. The plants ARE our planet. They are perhaps the most fundamental form of life, providing sustenance, and thus enabling the existence of all animals, including us humans. But although they are everywhere – dead or alive, wood or food, grown or wild, meds or cloths, paper or ink – we only notice them in passing, mostly as a green background. Even if we do look at plants we don’t know much about them. There are relatively few plants known to the majority of people, in most cases they are anonymous and mute. I am trying to recover from this pandemic “plant blindness” and to understand how can learning about them teach us about ourselves. The idea of narrated botany is concerned with the nature and meaning of difference. Tales, legends, poetry, history, politics, are embedded in the names of plants, in the fields, forests, meadows, gardens… If observed in time, the fluidity of language is dissolved even more by the plants themselves. They are constantly “interpreting” and remixing any linguistic connections we can think of through their own language and behaviour (the way they dry, die, grow, colonize the space around or overtake each other’s territories), they underline or discard certain parts/words – some lines grow bolder, some flower in silence, some die out. Inhabiting the language and overlapping various modes of communication eventually develops into a “biosemiotic turn”, into a third, unpredictable message, a “text” out of control, a phyto-poem with surprising spirit.

Love entangled1 blind eyes2 see bright3.
Leap up and kiss me4.
Kiss me quick5, kiss me quick, mother’s coming6.
Kiss me over the garden gate7,
Blow me down8,
Touch me not9,
Forget me not10. 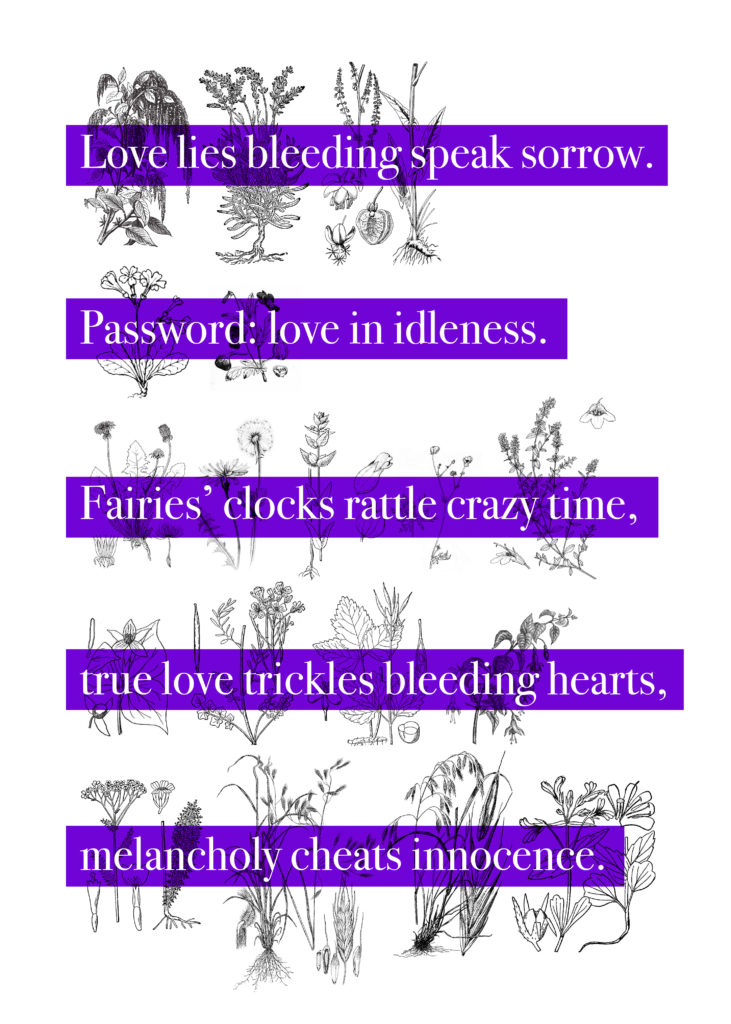