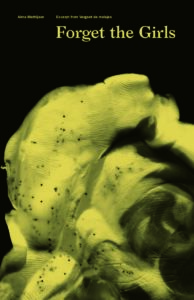 An American journalist named Fields travels with some reluctance to a small Dutch village to interview the famous writer Iris Kouwenaar. Once there, he is soon overwhelmed by a fascination for the mysterious relationship between Iris and her housemate, Kay. He forces himself into their life and observes the total devotion with which Kay cares for her deteriorating friend. In their own little world, between the four walls of a bedroom in West Friesland, the two women have surrendered themselves to one another.

Forget the Girls shines a new light on friendship, which is at least as intense and complex as a romantic relationship. In this novel Alma Mathijsen explores the thresholds between devotion and obsession, between self-sacrifice and egoism.

Alma Mathijsen was born in Amsterdam, The Netherlands. She earned her Bachelors Degree in Image & Language at the Gerrit Rietveld Academie and Creative Writing at Pratt Institute in New York. She is the author of six plays, a collection of short stories and three novels. Her first novel Everything is Carmen was published by De Bezige Bij in 2011, followed by The Great Good Things. Her latest novel Forget the Girls has been critically acclaimed, and is nominated for the BNG BANK Literary Prize. Mathijsen writes essays on feminism, representation and grief for NRC Handelsblad. Her work has also appeared in Vice US and Vice UK.