PARSE NOLA is proud to present The Colour Out Of Space curated by Deltaworkers (Maaike Gouwenberg and Joris Lindhout). The exhibition includes three films and three events with international and local artists. The exhibition opens on Friday, October 16th with a presentation from 6 to 7:30pm, followed by a reception. Additional events will be held on October 23rd and November 13th (details below). The exhibition runs through November 21st and gallery hours throughout the exhibition are noon to 5pm on Fridays and Saturdays. 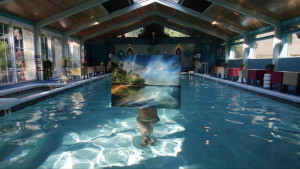 Film works by Melanie Bonajo (The Netherlands), Pauline Boudry (Switzerland) & Renate Lorenz (Germany) and Terence Nance (U.S.) form the starting point of a rotating exhibition. The focus from one film to the next will shift throughout the exhibition, allowing each to shine and gain additional meaning through engagement with local artists and theorists, including Red Vaughan Tremmel, Ashley Teamer & Local Honey, Brad Benischek and Dave Greber amongst others.

For the exhibition, The Colour Out of Space, curators Gouwenberg and Lindhout focus on motifs like rituals and technology, gender politics, and Southern mythology. They find these themes of importance within the international art scene, but also vividly present within the cultural soil of New Orleans. The artists and theorists involved with the exhibition all work within the range of things unknown in the visible spectrum and they do so using colors. From out of space.

The Colour Out Of Space is a short story written by H.P. (Howard Phillips) Lovecraft in 1927. Drawing inspiration from a number of sources describing the extremely limited senses of humans, his aim was to create something entirely outside of the human experience: a truly alien entity. The story tells of the problems that arise after a meteorite crashes onto someone’s land. After its discovery the meteorite begins shrinking and local scientists are unable to discern its origins. As the stone shrinks, it leaves behind globules of color that are referred to “only by analogy” as they do not fall within the range of anything known in the visible spectrum.

PARSE is an art space and curatorial residency in New Orleans’ Central Business District that serves as a platform for critical dialog about contemporary art. This program hosts three to four visiting curators annually. During extended stays in the city, curators are encouraged to engage in studio visits with local artists, conduct research in the area, and utilize the PARSE facilities to experiment with the boundaries and possibilities of curatorial practice.

Schedule of events:
October 16 at 6pm:
Screening of Swimming In Your Skin Again by Terence Nance
Lecture on Southern Mythology by Deltaworkers (Maaike Gouwenberg & Joris Lindhout)
Zine by Brad Benischek

All three filmmakers in the exhibition have been shown at the International Film Festival Rotterdam.

Thanks to May Gallery, Prospect and David Sullivan for lending us some equipment!