The evening takes off with a conversation between Dutch artist Remy Jungerman, Prospect executive director Brooke Anderson, and folklorist Teresa Parker Farris, in which they focus on the different cultural elements and the specific aesthetics in the work of Jungerman starting from their mutual interest in the book Flash of the Spirit (Robert Farris Thompsen) and several works by Jungerman.

In their first public performative presentation in the city, theatre group Tijdelijke Samenscholing will share the findings of their research into the origins of the specific New Orleans sound and the social political function that music has in public space.

Interruptions throughout the evening come from the band The Big Hunger. Musicians Stan Vreeken and Jasper Slijderink met with many musicians in town, which will be audible in their tunes.

The evening will take place in the garden of the residency house and will end in a bonfire. Feel free to BYOB. The title of the evening is a quote from Walker Percy’s novel The Moviegoer, an important source of inspiration for P.3. 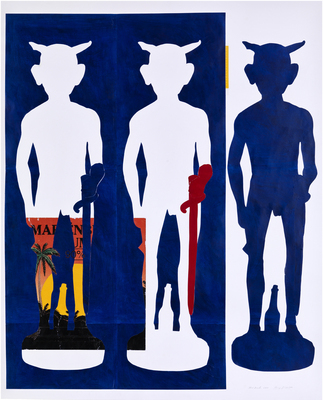 Remy Jungerman (1959) was born in Moengo, Suriname and has lived in Amsterdam since 1990. As a sculptor/ mixed media artist his recent work is intrinsically related to his Surinamese origins and is centered on global citizenship in today’s society. Jungerman uses collages, sculptures and installations to show cultural critique(s) of the local and the global, the internal and the external. Traditional materials and objects are placed in different contexts that challenge the established notions of their representation within Western society.  Jungerman gets his inspiration from Afro-religious elements of the traditional Maroon culture in Suriname and the Diaspora. At the same time he is also inspired by Western trends in art and modern communication technology.
He first studied art at the Academy for Higher Arts and Cultural Studies, Paramaribo (Suriname). After moving to Amsterdam in 1990 he studied at the Gerrit Rietveld Academy. Since his first group exhibition in the Stedelijk Museum, Amsterdam, Jungerman has participated in several solo and group exhibitions worldwide. His work has also been published in numerous publications worldwide. In 2008 he received the Fritschy Culture Award from the Museum het Domein, Sittard The Netherlands. Various institutions and private collectors worldwide among which have acquired his work, amongst them Stedelijk Museum Amsterdam, Rennies Collection Vancouver, Art Omi collection NY and The Francis J. Greenburger Collection NY.

Brooke Davis Anderson is the executive director of Prospect 3. She held the position of Deputy Director of Curatorial Planning at LACMA and from 1999 to 2010, Anderson was Director and Curator at The Contemporary Center and the Henry Darger Study Center at the American Folk Art Museum in New York. Previous to these posts, Anderson was Director of the Diggs Gallery and Assistant Professor of Fine Arts, at Winston‑Salem State University, in Winston‑Salem, North Carolina; Adjunct Instructor at Columbia University, New York, and City College of New York, New York; Guest Curator at Museo National Centro de Arte Reina Sofia in Madrid, Spain; and Acting Director, Assistant Director, and Gallery Assistant at the Francesca Anderson Gallery, in Boston, Massachusetts.

Teresa Parker Farris is a folklorist and writer who specializes in the vernacular traditions of the American South. She serves as Chair of the Louisiana Folklife Commission, a governor-appointed advisory board for the state’s folklife program, and on the New Orleans Jazz & Heritage Festival’s Cultural Programs Advisory Panel.  A Ph.D. candidate in history and art history at Tulane University, she holds an M.A. in Southern Studies from the University of Mississippi, studying under folklorist Bill Ferris, and a B.A. from Haverford College where she focused on Southern literature, in particular the writings of William Faulkner.  Ms. Farris was the folklife section editor for A Unique Slant of Light: The Bicentennial History of Art in Louisiana, a project of the Louisiana Endowment for the Humanities, and has essays in the Museum of American Folk Art’s Self-Taught Artists of the 20th Century: An American Anthology and the Center for the Study of Southern Culture’s Encyclopedia of Southern Culture.  She has also contributed to numerous exhibition catalogues published by Tulane’s Newcomb Art Gallery, where she has worked since 2006.

Tijdelijke Samenscholing (“Temporary Gathering”) is a Dutch theatre group consisting of musician Stan Vreeken and actors Michiel Bakker and Carole van Ditzhuyzen. In their work, they combine social political and literary sources with personal stories, themes or thoughts. Like the actors, the music in the performances has its own autonomous voice, and is not used to support the play or to create a specific mood. The music looks at the themes in the play in a totally different way, which creates an extra layer in the text-based theatre plays of Tijdelijke Samenscholing. Again and again, the performances present a balancing act between truth and lies, public and private, the reality outside and the actual situation on stage.

Tijdelijke Samenscholing is in New Orleans to research their next piece, which will investigate the origins of jazz and the role that music plays in public space. For this play, the group collaborates with The Big Hunger, the band of which Stan Vreeken is a member. They are looking for answers to questions like: has music thrived in spite of the city, or has it restored it? How have different traditions informed one another? Has New Orleans’ music performed a role in social justice? Is music’s existence at odds with the people who live here, has it catered to some while alienating others, or has it carved out the city as we know it? And how has that changed throughout the city’s history, between tragedy and tourism, inequality and the internet?

← Deltaworkers at Tulane UniversityPechaKucha Night | New Orleans | Volume 14 – We Can Do It! →