Sweat is the new film by Elsa Brès, who filmed most of it during her stay with Deltaworkers in 2019.

Sweat premieres at FIDMarseille on the 23rd of July 2020.

Counting, walking, getting lost, then dissolving into the landscape. Such is the movement in which Elsa Brès involves us in Sweat, a film shot in the Mississippi delta. At the very beginning, at the pace of a walker, the mischievously incomplete count of steps, captured in fragments. A scansion that is both a recollection of the first mapping of the delta (as suggested by the outfit), and an elementary impulse to measure the world. An opening gesture that the film quickly erases to better go with the flow, drift, and immerse us into the meanderings of the river, between flood tides and overflowing. We drift from one nameless place to the next, following tributaries, through a luxurious nature, bearing scars of human presence and exploitation, like the gigantic oil complex we catch a glimpse of. Through this both sensorial and mental journey, between yesterday and today, while alluding to fruitless fights to try and tame the elements (flood, swarms of insects), the film gives prominence to brief encounters, either with men or animals. An invitation to let ourselves be absorbed into the very matter of a space with unstable contours, made of indecisively drawn banks, like so many convergence lines. Thus, Sweat draws the passage from a charted area to the shapeless, from the ridged map to the smooth space, to borrow Gilles Deleuze’s words. And here we are, plunged into an environment teeming with the noise of its inhabitants, rustling like so many cautionary news about the excesses of a delta that is lived-in, oozy, sweaty, as indicated by the title, like a body, a living organism. (Nicolas Féodoroff, from FIDMarseille catalogue) 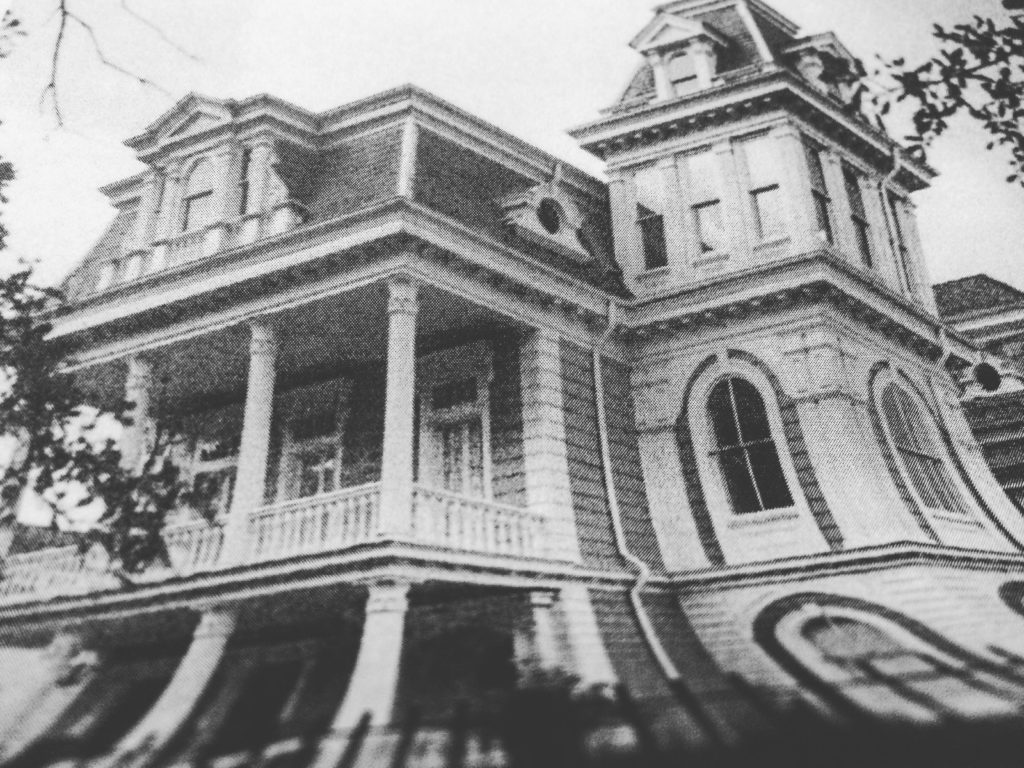 What the fuck are you looking at? Why are you staring at me?

He tells me, irritated, one of three guys sitting on the porch of a house on – I don’t know what street. I would have replied “ah no, sorry, I wasn’t looking at you, but at some kind of specter of you which is buried in a cinematic elsewhere. In this case a very recent elsewhere since I’ve just seen Moonlight (2016), because everyone was telling me that it’s an amazing film, and so a scene came to my mind… I don’t care what you’re doing, I looked at you with the same stupefied face as I looked at the kids playing baseball in the backyard of a house some blocks down. Me, I’ve only seen this thing in the movies. From my own personal archive I’m drawing frames or stills which I have unconsciously saved and which, just as unconsciously, pop out as I’m cycling or walking.“

Obviously I don’t reply anything like that to the irritated guy. I limit myself to looking down and sneaking off as quickly as a rat when startled by a sudden noise.

One thing all films have in common is the power to take perception elsewhere. As I write this, I’m trying to remember a film I liked, or even one I didn’t like. My memory becomes a wilderness of elsewheres. […]

I will allow the elsewheres to reconstruct themselves as a tangled mass. Somewhere at the bottom of my memory are the sunken remains of all the films I have ever seen, good and bad they swarm together forming cinematic mirages, stagnant pools of images that cancel each other out. A notion of the abstractness of films crosses my mind, only to be swallowed up in a morass of Hollywood garbage. [Robert Smithson, A Cinematic Atopia, in Artforum. Special Film Issue, edited by Annette Michelson, September 1971.]

The fact is that my first week in the US, in New Orleans, is a trip down these personal elsewheres from cinema or national television. They ask me what has struck me the most in these first days in New Orleans. “Hey Gio, so what’s the most beautiful thing you’ve seen till now?“

“I like to wander around and look at the houses at different moments of the day.“ 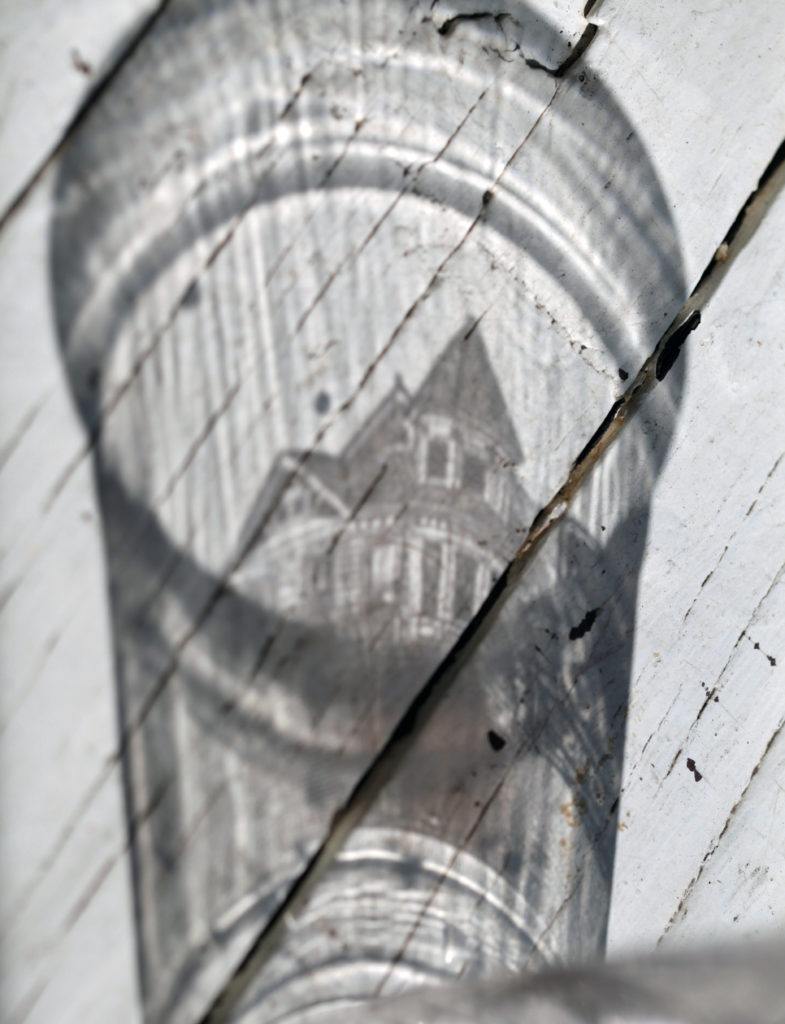 In fact there is no shortage of richness in architectural styles here. I have a little booklet from the Historic District Landmarks Commission of New Orleans in which they’ve gathered all the different types of houses in the city: from the Shotgun to the Townhouse and Greek revival.

But, before I can put my new architectural knowledge to use, television images from my childhood pour into my mind. Images floating in my cinematic subconscious. “They float down here…they all float down here” as Pennywise said to Georgie before killing him in the TV miniseries IT (1990). In fact, I can’t help but notice I’m riding a cruiser bike like one of the kids in the series.

“So, in order to get to the center I head towards the house of “Freddy Kruger in Nightmare on Elm Street” and then, shortly after, I cross this sort of jet market from the “Simpsons”, turn right and find myself on the street with colonial houses which seem like “Gone with the Wind” reshot in 2017… and, bam, I’m in the center”.

My mental maps are a collage of overlapping and interchangeable visions, a film privately projected in the movie theatre behind my eyes. The fiction preceding my gaze, which has crept in as a filter between the landscape that surrounds me and the retina of my eyeballs. Many are those who tell me that the first week is the one in which the jet lag manifests itself most intensely; you find yourself intoxicated for free, a constant wakefulness which slightly distorts the perception of things and of the flowing of time. You are, in other words, constantly “stoned”.

Horror movies play with our strongest emotions and the fear and distress they evoke cause their images to remain in our visual memories the longest. They are glued stuck there, like chewing gum under school desks until you lay your hand on them.

During my gothic metal teens, I watched an infinity of horror movies (to be honest I’ve always watched them but in my teens it was my duty as a metalhead), thanks to this visual baggage, Louisiana (the one geographically situated in my imagination) has become a land of horror. We (me and the metalheads) often watched interviews with the vampire.

In my mind, even films that weren’t filmed in Louisiana were filmed here. Louisiana is the name of the receptacle which contains my personal archive of horror memories. These residential areas which I’m passing through, anonymous and new to me, are not familiar because of experience but are mentally decoded by my perception to be familiar. It is this feeling that I’m “reliving” things that amplifies the unsettling aspect of them, they are an echo of a deep-seated image infesting their appearance. As in The Fall of the House of Usher by Edgar Allan Poe.

The objects surrounding me […] I couldn’t deny the extent to which everything was known to me, and nonetheless I was surprised to perceive how strange the fantasies were that those ordinary images agitated in me.

In 1980, Lucio Fulci came to New Orleans to shoot the movie The Beyond (1981), which I have always called by its Italian name L’aldilà e tu vivrai nel terrore. Here (or in an elsewhere) is the Seven Doors Hotel that the main character reaches via the endless freeway which cuts through Lake Pontchartrain. The same dwelling, with slight adaptations, is featured in the movie Zombie 5: Killing Birds (1988), directed by Claudio Lattanzi and produced by the legendary Aristide Massacesi alias Joe D’Amato. Obviously I visited this house (now museum) during my first days in Louisiana. I needed to geographically pinpoint one of my cinematic elsewheres, to remove it from abstraction and experience it as a physical place, to then let it drift, as a mere image, in my memory. 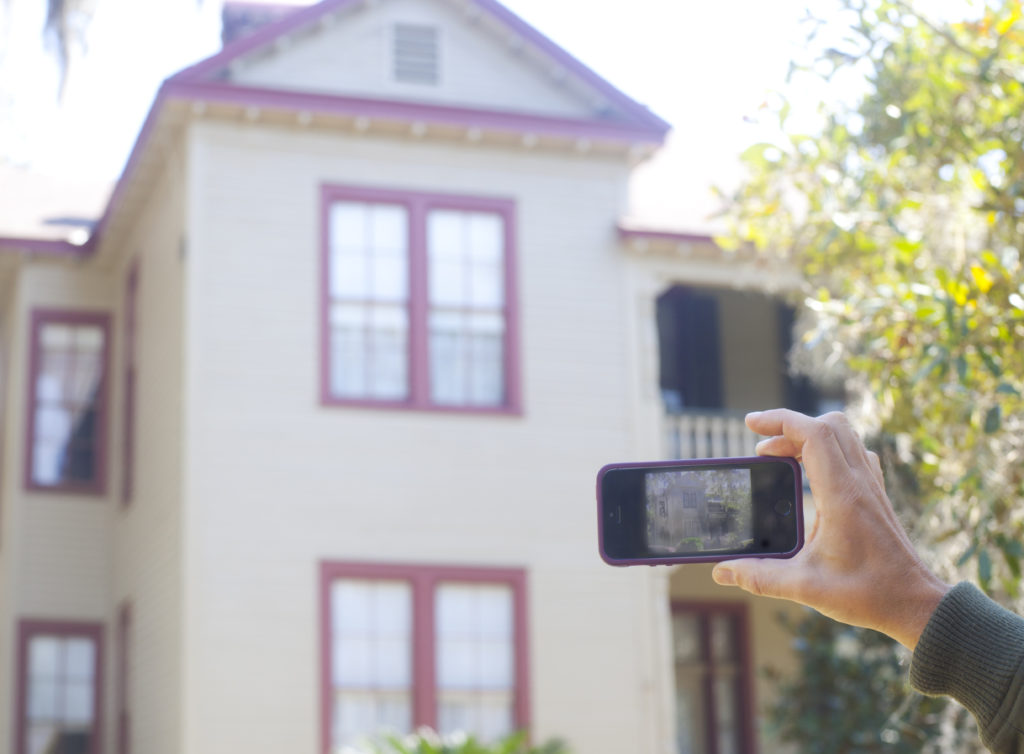 The Otis House. The photo on the phone is a still from Fulci’s The Beyond

I also wanted to go to the house used for the movie Amityville Horror (1979) but that is in Toms River in New Jersey. Strange though, I was convinced that I had seen it on – I don’t know what street, in New Orleans.

(…) sites in films are not to be located or trusted. All is out of proportion.

Scale inflates or deflates into uneasy dimensions. We wander between the towering and the bottomless. We are lost between the abyss within us and the boundless horizons outside us. Any film wraps us in uncertainty. [Robert Smithson, A Cinematic Atopia, in Artforum. Special Film Issue, edited by Annette Michelson, September 1971.] 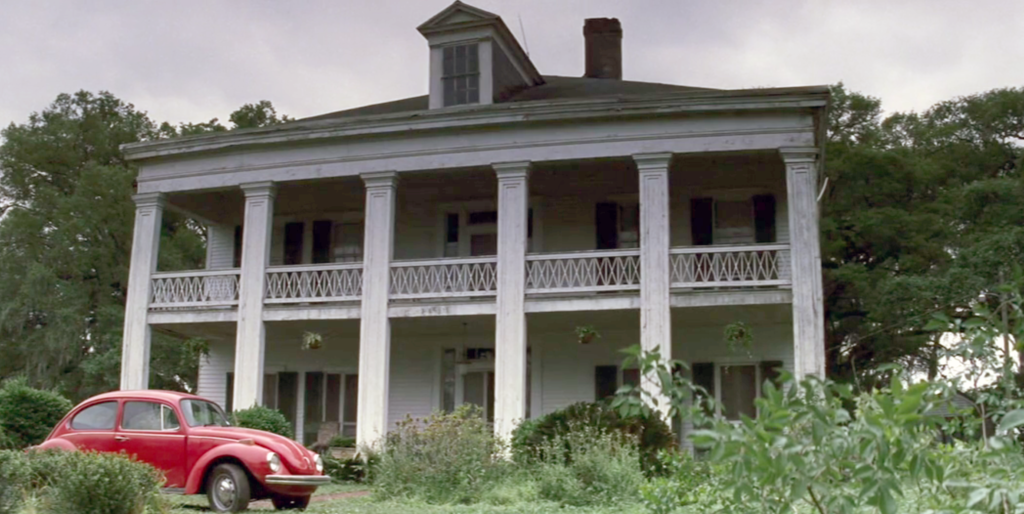 Still from The Skeleton Key

Current photo of the house by Giovanni Garetta