For centuries, goods and people, for a long time considered as commodities as well, have been shipped around the world. Triangular Trade focuses on the trade between Africa, Europe and America, i.e. the North Atlantic trade route. For my research I narrowed the triangle down to the Kingdom of Kongo (representing Africa), New Orleans – and the Southern States (representing America), and Belgium (representing Europe). In my search for traces of African culture in the Southern States I am looking at material remains and influences. Besides music (Congo square, Blues, Jazz, Rap and Hip-Hop), religion (Voodoo) and ceremonies (Mardi Gras, Second Line) there are not many physical materials that are still visible today. Cotton however, which due to its economic impact in America and Europe can be considered as the most important driver for the Triangular Trade, is still dominantly present. Fields of cotton are part of the landscape in the Southern States and people wear a wide variety of cotton cloths and pay with paper dollars that are made with cotton. After the invention of the cotton gin and the start of the industrial revolution in the United States, the import of enslaved people peaked, as well as the export of raw cotton to Europe. The finished product was sold around the world, including Africa, completing the triangle in an unsettling way. 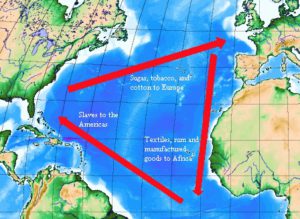 Most plantations are not in use anymore, while some are turned into museums. Together with the other residents of Deltaworkers and the always present assistant Maggie, we visit both Oak Alley plantation, one of the biggest and most known plantations along the Mississippi, which at the time was completely divided in plantation plots, and Whitney plantation, the self-proclaimed ‘only slavery museum in the United States’.

Although I appreciate the effort to tell this very sensitive and complex history, the way in which it is done, raises serious questions. The tour guide is a bored African American with dreadlocks hanging almost to his knees who tells the same jokes over and over again while we visit one memorial after the other. He speaks slow as a teacher in front of an ignorant class full of children and leaves regular spaces that need to be filled by the cleverest and toady student. Most of the time he fills in the blanks himself since nobody speaks up. His claims are sometimes questionable (The only three slave monuments in the United States can be found here) or just false (Mardi Gras Indians came about due to the incorporation of escaped slaves by Indian tribes – a long debunked myth). We are guided past lists of names carved in marble, contemporary monuments, stories and portraits embedded in stone, and again names and dates. To make things more ‘real’, the founder John Cummings, asked a local artist to make statues of enslaved children based on original photographs, that are spread through a church building like mass produced fashion dolls. Some are exactly the same cast coming from the same mould. In their attempt to make them look real, Whitney plantation moved from historical representation to theme park disneyfication. Most of the site consists of fakes, including objects and buildings. New trees and bushes are being planted, paths paved, sprinklers installed, ready to create the scenery for future history telling. I wonder if the emphasis on the interpretation and creation of history is the best way to show that same history. Especially when you take it upon yourself to be the only slavery museum in the US. Would this obscured past not benefit more from an objective approach? 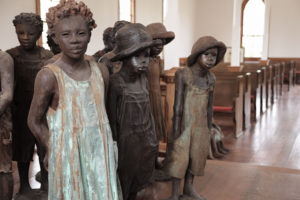 After the tour we wait in the shopping mall of slave souvenirs and an old man comes to us and wants to now if we liked the tour. Thinking he is waiting for the next one and wants to get a heads up, we answer his question. When we ask him whether he is taking the next tour, he comes forward as the founder himself! He is intrigued about our honest comments and takes us to a new section of the museum that is under construction. ‘Look here’, he said, while he grasps a hyper realistic black slave head from a big cardboard box. ‘This is for a new sculptural addition in the garden, a special ‘Adult Only’ area where heads will be put on metal spikes, by the same artist who made a children in the church’. We stand there, flabbergasted, with the head in our hands. He is clearly convinced of his approach and leaves us empty handed when he takes back the head after a long monologue about the importance of education and throws it back in the box filled with heads. 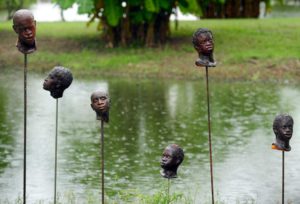 A few days later I go with Maaike Gouwenberg to the Cotton Museum in Memphis, Tennessee, where another strange encounter magically presents itself. Along the way we visit Vicksburg, arguably the turning point in the Civil War, opening up the Mississippi to New Orleans and splitting the confederate states in two. On the surrounding hills where the fight for the city lasted several years, the post mortem inaugurated monuments are so abundant that they almost add another geological layer to the historic site. The typical American drive-through approach helps enormously to make this memorial highway bearable. Contrasting to this gravestone overdose is Poverty Point (what’s in a name…), a World Heritage Site since 2014 where it is hard to see any trace at all of this past civilization which claims to be ‘an engineering marvel, the product of five million hours of labor and one of North America’s most important archaeological sites’. 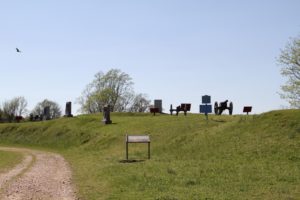 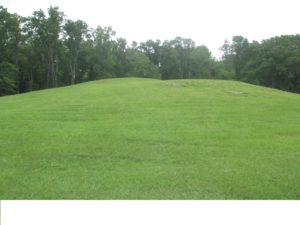 We stop briefly in Clinton, a small town just outside of Jackson that is not at all, but seriously should be, known for having the largest scale model in the world. German and Italian prisoners of war created the whole Mississippi delta in concrete slabs on a scale of 1:100 vertical and 1:2000 horizontal, to do tests with water elevation, dams and canals to predict floods and change floes in the system. It is now completely deserted and taken over by nature, leaving a strange landscape behind. 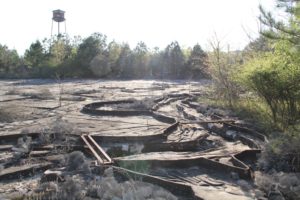 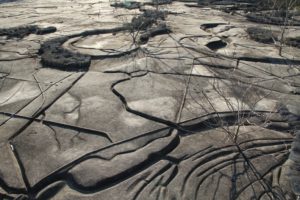 Along the way we tried to contact Calvin Turley, the founder of the Cotton Museum, without success. On arrival in the hallway an old man pulls up in front and starts to unload musical instruments, enough to form a small one-man band. He asks us if we are looking for something in particular and after explaining who we are looking for he grins and says: ‘Are you Police?’ He avoids answering our suspicions that he is just the guy we are looking for, until we help him get all the instruments out of his car and into the elevator. He promises to come back and answer all our questions. Just before he closes the car, we see the name ‘Calvin’ on his coffee mug. He does come back however and gives us a very elaborate tour in the former Cotton Exchange, in which he worked himself, until it was not desirable anymore to mark the value of the separate bales of cotton in chalk and the computerized trade took over. 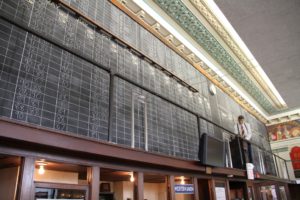 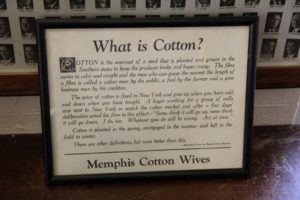 Calvin generously donates a bag full of cotton to work with before he disappears again. We visit the artist Greely Myatt in his beautiful and inspiring studio and have the best BBQ in town before we head back down on route 55. Empty fields of once harvested crops washed down by a Dutch drizzle rain, giving us the blues. We are welcomed back in New Orleans in an ‘old fashioned’ way, with bourbon, bitters and a garnish with orange slice, and a cocktail cherry. 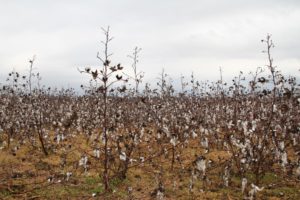 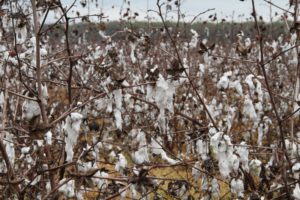